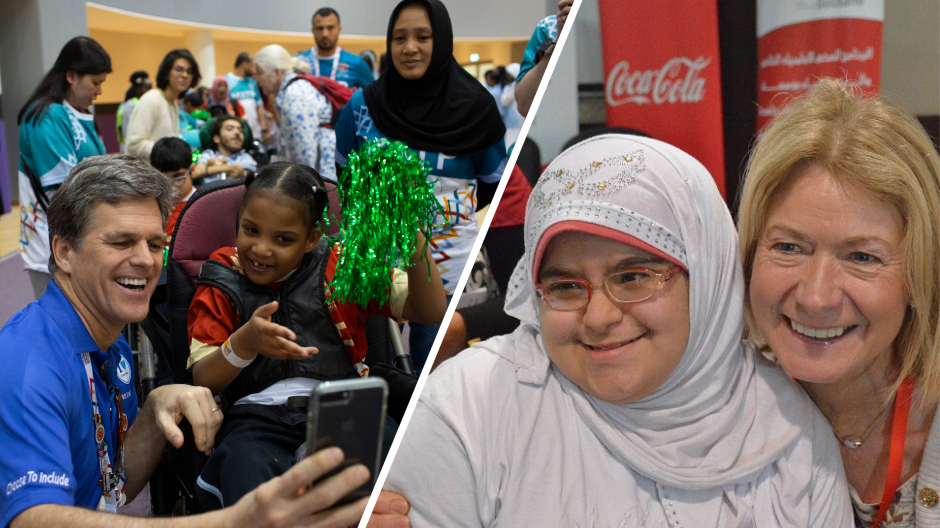 SO_split_photo.png
Athletes Are Leading the Way
Message From Our Leadership

We write to you at a time of anxiety and isolation. The virus pandemic has surely touched your lives and families, just as it has touched ours. It has separated us from one another. It has brought us closer, too, as we worry about the health of our loved ones, our communities and our world, not knowing what comes next.

In uncertain times we try to steady ourselves. We seek out compassion, love and bravery. We look — as always! — to our athletes, who exemplify those virtues in body and spirit. Their warmth warms us. Their strength strengthens us.

We felt their power all last year, as they led our movement through 12 months of joyous milestones.

The world is in crisis, and we fear for ourselves, our families and our futures. There is so much to do. But we know the goals. We have the plan. And in our athletes, we have the leaders who will take us there.

The biggest was the World Games in the United Arab Emirates, held in March in Abu Dhabi and Dubai. They were the largest Games ever, the first in the Middle East, with the most Unified teams and the most women in competition. More than 7,500 athletes from nearly 200 countries competed in two dozen sports.

The Emiratis put on a vast gold-plated spectacle, as expected, but the greatest triumphs were at human scale. Special Olympics Saudi Arabia sent a women's team for the first time. Their first medal came in bocce, and they won basketball gold. You should have seen the hugs and smiles. Our Chief Inspiration Officer, Loretta Claiborne, joined other female athletes at a traditional assembly, called a majlis, to discuss women in sports. The moderator was Zahra Lari, a hijabi figure skater from the U.A.E. Like Loretta, she is a role model in a part of the world that gives women and girls many steep mountains to climb.

At the Opening Ceremony, fighter jets trailed colored smoke and fireworks set the night ablaze. The crown prince of Abu Dhabi, Sheikh Mohammed bin Zayed Al Nahyan, directed his opening remarks to the "people of determination," his country's beautiful term for people with disabilities. “Today we send a message to the world that nothing is impossible when there is determination,” he said. “Here in the U.A.E., everyone supports you and takes pride in you.”

One of the thousands of athletes parading into the stadium was Malachie Niyibikora, a young man from Burundi. He had spent his boyhood in shackles in a refugee camp. Here he was running track for Tanzania. Through his coaches, friends, family and Special Olympics, he found an opportunity. He bravely seized it and did not let go.

The bubble of World Games was pierced by news of a massacre at a mosque in New Zealand. Our hosts welcomed New Zealand's athletes to an impromptu memorial gathering in Abu Dhabi's Grand Mosque. A large circle of mourners formed in the vast courtyard, where athletes and coaches grieved and consoled one another. Through many tears and hugs, strength was renewed, and the Games went on.

There were milestones outside the field of play. In a powerful gesture for inclusion, the government in Abu Dhabi committed to making every one of its public schools a Unified Champion School, where students with and without intellectual disabilities play, teach and inspire one another as classmates, teammates and friends.

A new class of Sargent Shriver International Global Messengers, 10 athlete leaders who received training to bring the inclusion message to the world, officially began their four-year terms in January. In Abu Dhabi, two Messengers, Renee Manfredi and Nyasha Derera, emceed a ceremony at which the Golisano Foundation presented its annual Health Leadership Awards to seven individuals and organizations doing groundbreaking work on behalf of people with intellectual and developmental disabilities around the world.

The Golisano Foundation is our most important supporter and partner in removing barriers to health care and wellness for this medically underserved population. It continued its vital mission in 2019. In August its executive director, Ann Costello, traveled to Kenya, where the Foundation and Special Olympics Kenya have been partners through the Healthy Communities initiative since 2014. She met with families, teachers and community-health volunteers in Nkaimurunya and Kawangare, and declared the work they were doing "not just a model for Africa, but for the whole world."

Closer to home, the Foundation gave $1.5 million to a new cancer-treatment center in Niagara Falls, N.Y., and opened an athletic center in Nazareth College in Rochester. Both centers have the goal of increasing access to life-saving health care and fitness for people with intellectual and developmental disabilities. In Nazareth, the Golisano Training Center will benefit Special Olympics athletes across central New York. But it will also help students at the college in health and medical fields, who will be able to work with these athletes and learn about caring for this medically underserved population. The unified world we seek takes many forms.

The Unified Sports program continued to grow last year. Special Olympics Italy was host to Europe Eurasia’s first Beach Games. Our athletes also made waves in the entertainment world. Zack Gottsagen of Special Olympics Florida starred with Shia LaBeouf in the critically praised film "The Peanut Butter Falcon." He played a young man who runs away from home with dreams of becoming a professional wrestler. Cole Sibus of Special Olympics Southern California joined the cast of the hit TV series “Stumptown” on ABC, playing the brother of the lead character.

In its 10th anniversary year, Spread the Word to End the Word, the groundbreaking grassroots campaign against bullying and discrimination, was rebooted to broaden its international reach and to focus on inclusion. It became Spread the Word>>Inclusion, with a wider mission and a new website. Many hundreds of thousands of people have taken its pledge to make their schools, workplaces and communities more welcoming.

The energy of our 50th anniversary year — commemorating our founding in Chicago on July 20, 1968 — carried over into 2019, with events around the world. Special Olympics and ESPN created a series of short films called "Game Changers" that highlighted stories and people across our movement and beyond who have helped to bring the unified world ever closer.

In a weekend celebration in July at the Kennedy compound in Hyannis Port, Mass., athletes and guests gathered and played sports and took stock of the last half century. They went home with a new book, "There Is Just Us: Special Olympics Rising." It is both a pocket history of our movement and a playbook for inclusion — a how-to manual for our revolution.

The world is in crisis, and we fear for ourselves, our families and our futures. There is so much to do. But we know the goals. We have the plan. And in our athletes, we have the leaders who will take us there.

The pandemic has been astonishingly universal in the damage and pain it has caused. But in a tragic sort of blessing, it has given all of us the chance to experience and understand life as so many people with intellectual and developmental disabilities already know it.

But also — the power of love and compassion? Now we know those, too. We confront calamity together, facing our difficulties as Special Olympics athletes would, with open hearts, faith in the goodness of others, and a deep yearning to connect.

And, perhaps most important, with the determination to be — in all things, as our athletes show us every day — brave in the attempt.

Till next year, and the years to come,