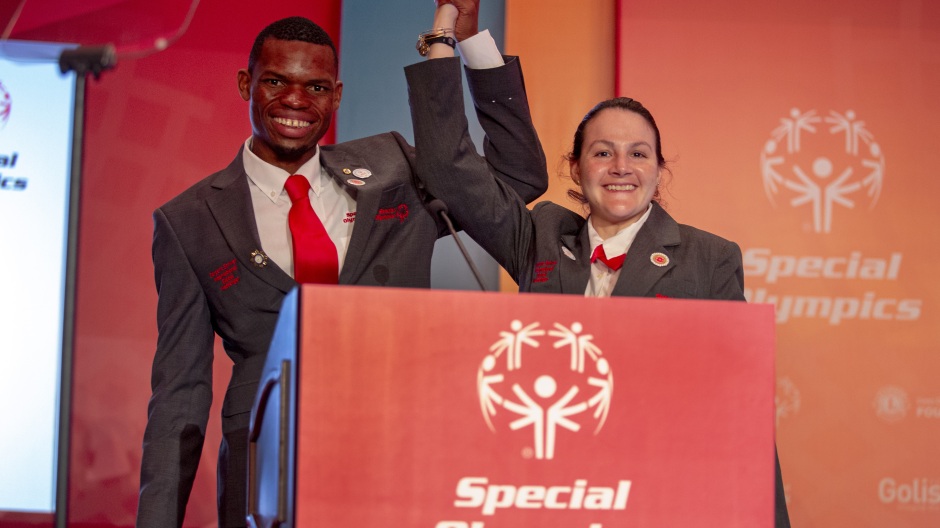 Nyasha-Renee-SOIAD-Global-Inclusive-Health-Forum-2019-196 (1).JPG
Athlete leaders Nyasha Derera and Renee Manfredi, co-emcees of the Global Inclusive Health Forum at the 2019 World Games in Abu Dhabi.
From ‘For Athletes’ to ‘Led by Athletes'!

In 2019, Special Olympics launched a bold, new era in Athlete Leadership around the globe. This new era is grounded in Special Olympics' Unified Leadership approach, which develops leaders who see the value of people with intellectual disabilities and empower them to lead.

This could not have happened at a better time.

The world is full of volatility, fear of difference, and pressures that divide people. Yet, through it all, Special Olympics athletes show everyone the value and importance of including everyone--of all abilities! Every day in every Region, athlete leaders are contributing to their communities, shattering stereotypes, and shaping new understandings of what it means to lead in today’s world.

Special Olympics athlete leaders are also serving as important new role models -- as coaches, as motivational speakers, as responsible employees. In a divided world, our athletes are proving that inclusion offers hope, a way out of these divisions. Perhaps that's why Athlete Leadership is growing at both national and global levels: We now count more than 58,000 athlete leaders worldwide—a 24% increase over 2018. Building on the power of our youth, our movement is also engaging and empowering nearly 100,000 youth leaders ages 8-25. That’s a 33% jump since last year!

To build an inclusive world, we must lead the way by developing strong, inspiring leaders. Special Olympics athlete leaders are doing all that -- and more, so much more!

This year marked a major leadership milestone: the first Special Olympics athlete-led panel was convened at the United Nations during the 12th Session of the Conference of States Parties. Six Special Olympics athletes led a panel discussion promoting the need for inclusive policies and programs for people with intellectual disabilities. They came from Zimbabwe, Brazil, the United Arab Emirates, Florida, Missouri and California, USA--and each had a lot to say!

The event happened in partnership with the United Nations Division for Inclusive Social Development of the Department of Economic and Social Affairs and the Permanent Mission of Ecuador to the United Nations. In addition to the athlete-led panel discussion, athlete leaders took part in other sessions, gave a statement during the UN General Debate--and even led a Special Olympics Unified Sports Experience -- in bocce!

This was also when we launched our new “Unified Leadership” initiative approach that goes beyond training athletes: it works to develop inclusive mindsets and skills in leaders without disabilities inside Special Olympics and externally.

Unified Leadership works because it turns the norm on its head: people with intellectual disabilities are the teachers, inspiring everyone toward a new perspective on what is possible through truly inclusive leadership.

The approach is being integrated across Special Olympics sports, youth, health and leadership development work. The goal is to show how true inclusion is achieved when leaders value those who are different, adapt to their needs, let them lead and build inclusive environments where everyone can succeed!

Within Special Olympics, Unified Leadership aims to ensure meaningful roles and jobs for athletes; examples include organizing sport events, advocating for health equality, and assistant coaching. These roles boost the confidence of people with ID, help Special Olympics to improve its services, and show what a truly inclusive organization looks like.

Beyond Special Olympics, leaders without disabilities experience a powerful mindset change, as they get the opportunity to address their biases and learn from the achievements, grit and resilience of people with intellectual disabilities (ID). This leads to a new, deep understanding of inclusive leadership where relationships matter, everyone has value, and vulnerabilities are accepted. In this way, we create communities where people with ID are able to be productive and respected, the ultimate goal of Special Olympics, while ensuring that inclusion benefits all.

At their first World Games events, the newest class of Sargent Shriver International Global Messengers made a big and positive impact. Their work started even before the Games began, as they took part in “meet and greets” with Special Olympics donors, rehearsed for high-profile events such as the Global Inclusive Health Forum, the Founders Reception in honor of Eunice Kennedy Shriver, and the Opening Ceremony! These gifted athletes embraced their leadership roles and worked hard to convey their empowering messages to varied audiences of different cultures. It is important to point out that the SSIGM participation in the 2019 World Games was unlike any other. They took part in a total of 65 speaking engagements, most of which were with minimal talking points and limited scripting.