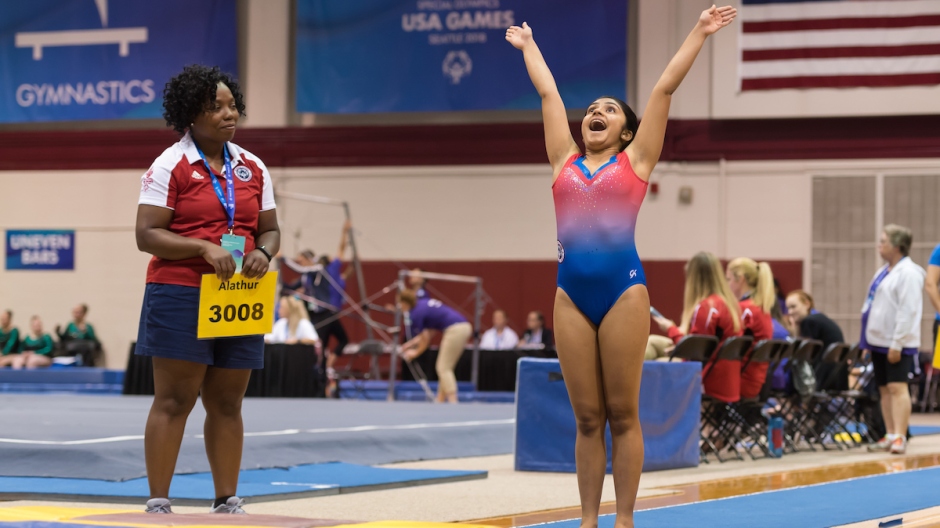 _ATP5010.jpg
Anne Todd
Rhea Alathur from Special Olympics New Jersey completes her routine with style while competing in artistic gymnastics at the 2018 Special Olympics USA Games.
Rise With Us

The 2018 Special Olympics USA Games in Seattle demonstrated the abilities of athletes with intellectual disabilities through world-class competition. Held from 1-6 July, the games promoted the ideals of inclusion through sport. The USA Games kicked off with an Opening Ceremony that saw a record-breaking number of fans in the stand with 45,000 attendees at University of Washington Husky Stadium.

The five day event included nearly 4,000 athletes and coaches from all 50 states and the District of Columbia. They competed in 14 Olympic-type team and individual sports, making it the biggest sporting event to hit the Seattle area in more than 25 years. Over 7,400 medals and ribbons were awarded to athletes and Unified partners. A total of 15,000 volunteers and 102,200 spectators showed their support for the athletes.

The Games in Seattle made history thanks to ESPN. For the first time ever, nationwide television audiences witnessed the excitement of opening ceremonies and daily competitions. Other notable highlights for the 2018 Games included:

For the first time at USA games, youth leaders were embedded at the games at every level. They acted as key volunteers at the Young Athletes Festival and other special events; and shadowed ESPN staff, technical delegates, HODs, select sponsors, Games leadership and SONA leaders.

Overall, 111 youth leaders from 37 programs attended the Games including 74 Unified Youth Leaders and one mentor. Many of them participated in the first-ever career development discussions that were held with partners in medical, education, health, university and sports management disciplines. Hasbro and the U.S. Dept. of Education/OSEP praised the program growth since 2008.