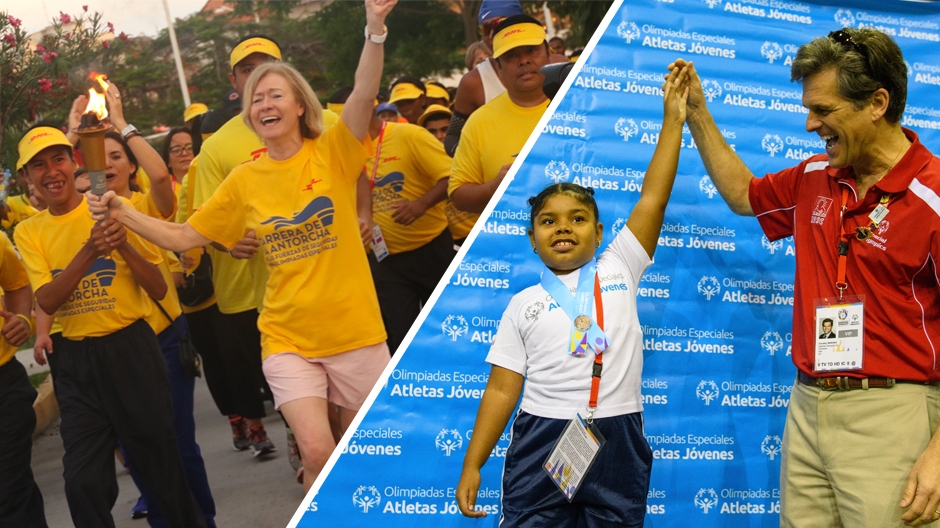 SOAR-leadershipletter-leadimage.jpg
Join Our Peaceful Revolution!
Message From Our Leadership

2017 was filled with the power of inclusion. We celebrated milestones in the journey toward justice as we came to the brink of our 50th year. Thousands of our athletes caught the eyes of millions in World Winter Games shown around the world, while others waged the Inclusion Revolution in places far fewer people see, like the floor of a high-school gym in Nebraska.

Global equality for people with intellectual differences is an unfinished project. But the athletes of Special Olympics are pushing it forward everywhere, and everywhere their message is the same: If you want to learn about ending discrimination and fear, if you want to see the world with new eyes -- look to us. We will be your leaders and teachers, your guides and friends.

In March, 2,600 Special Olympics athletes gathered in Austria to compete in the World Winter Games. Rain could not dampen the spirit of the electric Opening Ceremony. The live broadcast, aired in 190 countries, shattered the media record for Special Olympics.

In July, eight athletes joined former U.S. First Lady Michelle Obama onstage at the ESPY Awards to honor our founder, Eunice Kennedy Shriver, who was posthumously awarded the Arthur Ashe Courage Award. The award was for her lifelong devotion to enriching the lives of people with intellectual disabilities through sport. The ceremony garnered one billion media impressions, bringing unprecedented attention to our movement for the second time in 2017.

If you want to learn about ending discrimination and fear, if you want to see the world with new eyes—look to Special Olympics athletes. [They] will be your leaders and teachers, your guides and friends.

Our health program continues to charge towards our goal of improving access to quality health services for 11 million people with ID by 2020. Special Olympics Healthy Athletes®, which offers free health screenings to our athletes worldwide, hit the milestone of 2 million screenings. We also added Strong Minds, which focuses on emotional well-being to ensure athletes are healthy in body and mind.

We also celebrated 30 years of “A Very Special Christmas,” our series of holiday albums by an ever-growing roster of leading musicians in pop and rock and jazz and hip-hop. The albums’ sales continue to generate tens of millions of dollars each year for grants that benefit underfunded Special Olympics Programs around the world.

Our work was aided by the generosity of a wide range of partners and allies. In 2017, contributions from the European Union and the U.S. government helped to, respectively, fund the World Winter Games, along with our inclusive health program and Unified Champion Schools. Lions Clubs International celebrated their centennial in Schladming, Austria, by announcing a $1 million donation to Special Olympics. Special Olympics established partnerships with UNICEF, the Inter-American Development Bank, and the Pan American Health Organization, and continues to have a high-impact relationship with the Golisano Foundation, the provider of much funding for life-saving health initiatives.

The progress we made in 2017 gave us hope for the journey ahead. Our 50th anniversary year will be a time to celebrate, but not a time to rest. We’re not done. Far too many of the 200 million people with intellectual differences worldwide are still forgotten, still hidden away. We won’t rest until there is equality for all.

In June 2017, we visited Papillion-La Vista South High School in Nebraska. The students there had led a revolution bringing students with and without intellectual disabilities together and creating a culture of inclusion for all.

When we arrived, the gym was packed and shaking with noise. Then came the student-leaders -- some in wheelchairs and walkers, others as their Unified Sports partners.

The superintendent said it was the proudest day of his life. One 16-year-old girl, now a Unified partner to a student with a disability, said: “Before I got involved, I didn’t want to get out of bed in the morning. Then I saw the people who believe in something bigger – to make a difference. Now I can’t wait to get to school every day.”